How to keep a process running when you are in a remote shell like ssh?

Sometimes we need to run porgrams in remote shell, such as download, update or other things, but if you quit the shell, the process will be killed, so how to keep it?

Linux offered a command called nohup, it will redirect output of your program to a file called nohup.out in your current directory, and you can execute it like this:

you need to add a & to put the process to the backgroud, and shell will output like [1] $pid to show you the process id. And the [1] is the pid of your background processes, you can use jobs to check them.

a little troublesome, isn’t it?

Linux have a command called tmux:

tmux is a software application that can be used to multiplex several virtual consoles, allowing a user to access multiple separate terminal sessions inside a single terminal window or remote terminal session. It is useful for dealing with multiple programs from a command-line interface, and for separating programs from the Unix shell that started the program. It provides much of the same functionality as GNU Screen, but it is distributed under a BSD-like license. –wikipedia 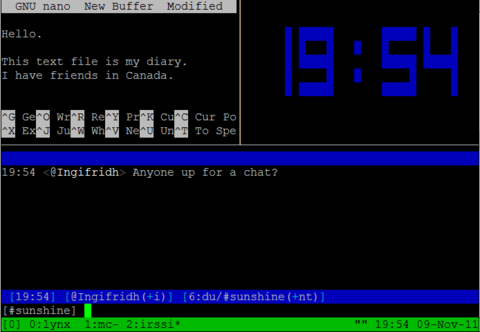 tmux can not only divide your screen, it can also separate programs from the Unix shell that started the program, you can execute your program in tmux and then quit the shell, and the process will still running. if you want to check the output informations of the process, you can use tmux attach to enter former shell. If you attach a tmux which is running, operations will be synchronized, so it’s a good way to show some operations to others.

If you are in tmux, and you want to quit shell, you can use ctrl+b+d or ctrl+b :detach to quit tmux, and the process will still running, and you can do other things or quit remote shell.

there is a simple tutor to tmux

Tmux is useful, and I think it may be good to enter tmux before executing a time-consuming process, and you can avoid process interrupted by doing this.